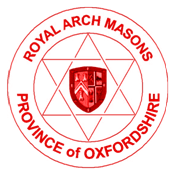 The Round Table Lodge of Oxfordshire also has a Royal Arch Chapter attached to it and meets three times a year in February, April & June.